It all started when I asked people on Twitter who they followed and why. 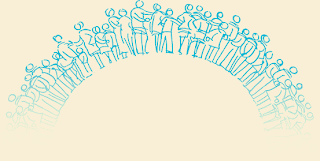 @David_N_Wilson responded “That would take an entire blog entry (maybe several?) Maybe we should organize a day for tweeting about who to follow & why,” and I wrote back  “You know, I think that's a GREAT idea. We SHOULD write blog posts about who we follow and why. You're a genius!”

We came up with the hashtag #whoandwhyIfollow to track everyone's posts and tweets (just add #whoandwhyIfollow to any tweet about this topic so others can find it easily). David thought we should set a day for everyone to tweet, and started with some wonderful profiles. Most cool of all, he started Tweepleblog to profile people! (Here's his mission statement.)

Unfortunately, just as we were getting underway I had to leave town suddenly, and my free time disappeared—I hold down two radio jobs, besides teaching and performing dance and voiceover. So, keeping in mind the deadline David suggested and my lack of time, I'm going to start with a list of folks instead of individual profiles (initially the idea was to profile three people). I'm going ahead and posting this first, and adding to the descriptions later. Otherwise I'll never get it done!

The worst part of this is of course all the people I'm leaving off just to try to make it a manageable size! If you want the big list of my favorite people, start here.

Right up front are David and Mr. Tweet, since Mr. Tweet's mission is to help you find people to follow, I thought it would be appropriate to include him. Next are my family and close friends (My husband is also named David!), and following that are some Tweeple I think are special folks.

How did I choose who to mention?

Basically, these are all special people to me! But I've concentrated on mentioning people I've known the longest on Twitter, for the most part. I'm leaving off some great people that I've met only recently, since I haven't had that much time to get to know them yet.

Some are people who've done something special for me. Others I've been touched by reading their blog, or just really enjoy chatting with, on or off Twitter.

Oh, and at the very bottom are my favorite funny folks!