Dove's Campaign For Real Beauty had a GREAT idea--hold a contest for a commercial for their newest product, Dove Cream Oil Body Wash 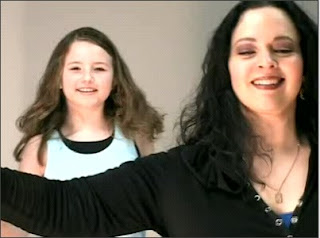 I put in a video entry to the contest, but unfortunately, my husband and I had less than an hour to edit the video due to an unexpected trip and technical difficulties before the deadline came up.

But thanks for all your votes! We had a great time dancing with the girls at Caryn's academy in getting footage for the video. We wish we could have made them all stars!

Our rating placed us on a par with about 7th place in the finalists -- although due to judging, we didn't make the final cut. Hopefully our next project we will be able to devote more time to.

Rock the Casbah in Algeria!

Algerian singer Rachid Taha's remix of The Clash's Rock the Casbah was sent to me by a friend. Fun to hear words like 'bogeyman' and 'caviar' in an unfamiliar Algerian dialect. More information at this website: Arab Culture and Civilization: A collaborative web project from NITLE.

Email ThisBlogThis!Share to TwitterShare to FacebookShare to Pinterest
Labels: Funny, Pics and Video

Baba says ... are you listening?

An interesting story began at one of my restaurant dance gigs ...

My music started and I came out on stage. I noticed a table of 4 to the left of the stage--3 women ranging from 35 or so to 55 or so, and a man about 60. They watched my show pretty attentively while they ate and enjoyed each other's company. When it came time for me to go around for tips, at their table they had a few questions.

One woman introduced everyone and did virtually all the talking. The man was from India while the women were different ethnicities--European- American (white), African-American, and European (don't remember from where.) The white American woman who did all the talking had a pleasant smile, and kept her eyes on the man as she talked to me. He continually grunted to get her attention and used sign language, which she interpreted.

"Baba says," (she began each sentence this way) "That is a very beautiful costume."
I smiled and addressed him, thinking perhaps he read lips. "Thank you," I said.

"Baba says, 'that looks like a very expensive costume.'"
"All nice costumes are expensive," I chuckled.

"Baba says, 'where did you get that costume?'"
"Actually, I got this one from a belly dance vendor who purchased it in Turkey. It's my only costume that I didn't have custom-made for myself in Turkey or Egypt. I'm glad you like it." (This is my one from Faye's Originales, out of Atlanta. She had brought it, and other wares, to vend in Minneapolis at the Cassandra School.)

"Baba says, 'it is very beautiful.'"
I thanked them both and began to move to another table. Another grunt from Baba.
"Baba says, 'would you be available for a party at our house?'"
I said, "yes, let me just finish up here and change, and I'll come back out and chat with you then."

Baba grunted his agreement, and I finished my finale and went back to the dressing room to change. I came back in regular clothes, with a business card for Baba. Excited grunting began.

"Baba says, 'we have a distinguished guest coming to visit from India next week. He is a goldsmith. You wouldn't believe the beautiful things he makes. Anyway, we are having a party to honor him, and we would like you to be the entertainment. Are you available on the 19th, and what would you charge?'"

I asked for more details, where the party was (it was in a far-flung northern exurb of Minneapolis) how long they would want me to dance (2 separate times, 2 costumes, 20 minutes each) and other details that affect my rate, and asked for $300.
They said no problem. They'd call me with the details during the week. The woman finished the conversation by giving me Baba's card, and said, "Baba has been silent by choice since 1961." The card said that, too. "Baba ______. Silent-By-Choice since 1961."

If you call those strange noise grunts silent.So he could hear! Okay, whatever. Different strokes.

A few days later, the European woman called to interpret for Baba, who grunted in the background. "Baba says, 'we would like you to come by and see our house and how we live, and if you like it, and decide which room would be best for you to dance in.' Grunt. 'We have a lot of art and things that we wouldn't want to be harmed.' Baba says, 'when can you come by to see our home?'"

I had a very busy week, their place was pretty far away, gas prices were ridiculous, and at the time I was driving a gas guzzler. And an extra trip there was really not necessary. Also, why would I care how they lived?

I said, "tell you what-- I'll come about an hour early on the 19th and take a look. You could see how much space I needed at Jerusalem's--that's a pretty small stage, after all. I'll dance wherever you want me to."

I heard grunting. I truly thought they were concerned about the best space for me to dance. I continued, "the main thing, for me, would be a preference that it not be on carpet. If you have an uncarpeted room, that's best, but if you don't it's no problem, anywhere is fine."

We finished the conversation saying, see you on the 19th. I decided, whatever was up with these folks, Dave would definitely be going with me as my roadie. It was hard to tell, with the "conversation" part of things being so different from what I am used to, whether there would be other things different than I might expect as well. Especially the "how we live" part. I don't mean to be judgmental, I just want it to work properly for dance with normal consideration for the dancer.

They called later and canceled the gig.

I've always wanted to blog my gigs, and it's high time I got started!

I'll begin with my very first night at Jerusalem's in Minneapolis...it was in January of 2000. I was standing in the kitchen in costume, warming up a bit, and keeping my eye on the clock. Jerusalem's shows are at 7:30 and 9 o'clock regardless of how full the restaurant is--let me just say this is a wonderful system! I could always tell my students exactly what time they could see dancers at any of several venues in the Twin Cities. Dancers could plan their acts, they knew when to be ready and when they could leave! More on that later.

So I'm standing there when a customer walked by me on his way back to his table from the men's room. He looked me up and down and said, "Are YOU the entertainment tonight?" (knowing I HAD to be--who else stands in the kitchen of a Middle Eastern restaurant in stage makeup and beau coups sparkles?) I nodded and he said, "OH BOY!!!"

That was my welcome, my first night at Jerusalem's.

He was a regular customer who I saw many times with his wife over the next 6 years. They were always attentive, and always tipped--'though never extravagantly. In fact, one night as I made my way around the tables, he said, "It's my birthday tonight! Know what that means?" I said, "It means you'll FINALLY get up and dance with me tonight?" He said, "No! It means I can tip you TWO dollars!!"

Sohair Zaki: an elegant brilliant Oriental dancer from some decades ago.
This appears to have been filmed sometime during the 1960s and 1970s, when a more burlesque and silly performance style prevailed in film.

Sohair Zaki's performance itself is classic and beautiful. You can read about Egyptian Cinema here. The two guys in the video appear to be Samir Ghanim and Ahmad al-Daif. Here's a link to the video on Metacafe (where they misspell her name).
No comments: