What's unique about this restaurant? 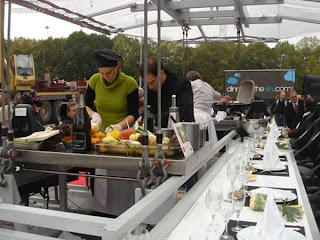 If you don't already know this restaurant, and your meal was paid for, would you eat here based only on this photo?

Seems tame enough at first glance, doesn't it? Almost looks like outdoor dining in the street somehow. Plus, it seems like they are pretty high up, closer to the the treetops than you might expect. Maybe it's rooftop dining?

But why then did Forbes name this one of the most unusual restaurants in the world? Hint: the piano is on a separate floor, at the same level, with no walls in between.

Figured it out? Notice the big metal hooks and eyelets in front of the food preparation area? Last hint: don't look down. If you haven't figured out what's unique about this restaurant yet, click here to see some other photos from this fascinating restaurant.

Dinner in the sky! 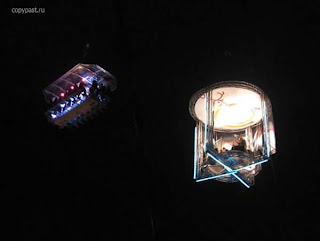 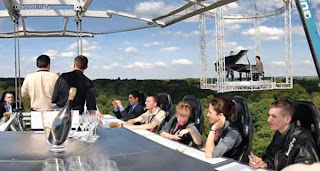 Wedding Planning While The World Watches ... And Helps!

Men sometimes say women over-plan their weddings. That's even a popular theme in movies (scripts chosen to bring men to romance genre movies, I'm sure). But what happens when the owner/executive chef of a Minneapolis catering company proposes? He and his fiancé plan it publicly in a major magazine and accept tips from readers, of course! 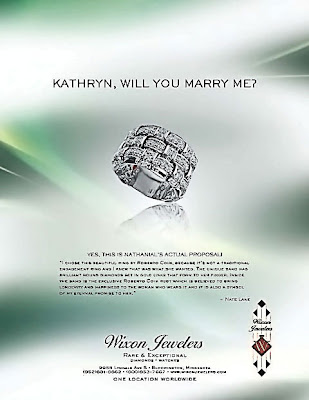 A former voice over student of mine, Kathryn Janicek, (soon-to-be Kathryn Lane) is blogging about her planning journey leading to her wedding. You can even email her your wedding tips. (You can follow the blog in Minnesota Bride or METRO magazine.)

Nate Lane, her fiancé, proposed through an ad in METRO magazine (right). He handed it to her an hour into a live show. Quite the show stopper! (As if that ring wasn't enough!) Nate's company, Thyme to Entertain, is a full-service catering company serving the Twin Cities.

And if all that wasn't enough, Garrison Keillor even mentioned the proposal on the air--Nate proposed during the live A Prairie Home Companion show! (Nate proposed just before the intermission, Keillor mentioned it at the start of the second hour.) So far they have decided on a small family wedding on November 8, 2008 to be held in a beautiful old church in downtown St. Paul, and a reception on a yacht on the Mississippi. 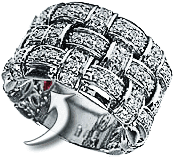 Did You Look Closely At The Ring?

When Dave and I married, I custom-designed a semi-traditional gold and sapphire wedding ring around a beautiful diamond that had been in Dave's family for generations. Kathryn, by her own description, wanted something different: a non-traditional “ring of substance” that didn’t scream “engagement ring.”

Notice the ruby on the INSIDE of the Roberto Coin ring (above). Of course, there's a story that goes along with that:

Do You Believe in Legends?

According to an ancient Egyptian legend (so the story goes), wearing a ruby near the skin promoted a long, healthy and happy life. Women in ancient times were said to use it to promote fertility, and Burmese warriors supposedly inserted genuine rubies beneath their skin to protect them.

Here's a pic of Kathryn, and here's what I believe: Finding a man who proposes so thoughtfully, regardless of the ring, is good luck! I wish Kathryn and Nate every happiness, a great wedding, and a wonderful life together. Go Kathryn and Nate!!

Update: Broken Links
If you have any trouble with the links in this post, click here, and then try again. The database for METRO magazine likes to have already been opened in your browser before showing you specific posts, according to my resident nerd (my husband!)

Ever Had Language Nerds Buffalo You?

I love wordplay and enjoy discovering interesting things about grammar and language (in English, Latin or Arabic), and recently came across some fun things that I thought I'd share. The internet is a great resource for us language hobbyists nerds! (And read on for the famous Buffalo buffalo Buffalo buffalo buffalo ... sentence!)

I don't know if you've caught the six-word bug that's been showing up more and more in the news. Here are some clever examples. (Warning: you'll have to think twice about the first one): 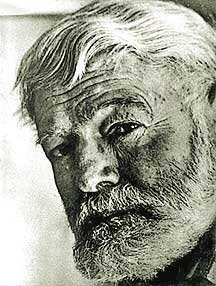 The trend supposedly goes back to Ernest Hemingway. Hemingway, so the story goes, was once prodded to compose a complete story in six words. His answer, personally felt to be his best prose ever, was

Written to settle a bar bet? A personal challenge directed at other famous authors? No one knows for sure.

The latest and greatest bit of news in this arena was the New Yorker Magazine's coverage of a new book of six-word memoirs in an article written entirely in six-word sentences. One of the many fun responses to the article was on Digg.com. Another fun place to visit is the Six-Word story group on Flickr. Here are some of my husband Dave's photos in that group: 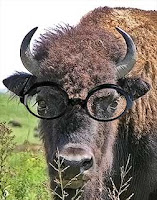 First, there is the famous "Buffalo" sentence: the word "buffalo" repeated up to twelve times making a grammatically correct sentence. ("Buffalo" can have four different meanings, making this possible.) It's based around a sentence like this one:

Lastly, there is the question: How many times in a row could the word "had" occur in a gramatically correct sentence? Amazingly, it can be used 11 times in a row. There's another Wikipedia article on this as well. Here's the middle of the actual URL at Wikipedia, good for a laugh on it's own: